Robyn Amelia Marine Carter is the main character of the story. She is a 14 year-old Italian-French-Jewish  feline-dhampyr hybrid. She has copper brown hair, fair skin/fur and ice blue eyes. Robyn is 5'8" and weighs 98 to 100 pounds. She has Siamese cat ears and tail Robyn's powers are to run up to 300 mph, hydrokinesis,enhanced strength and can breath underwater.

Nicolas Raymond Martinez Walker is 14 years old. He is Robyn's best friend (and later her boyfriend). He is only one month younger than Robyn. He is somewhat strong, often sustaining near-fatal wounds. Nick almost always wears dark clothing and always seems to be sneaking up on Robyn. He has brown hair and amber eyes with olive brown skin. He is believed to have DNA of a wolf because of his amber eyes that have a gold shimmer. He is somewhat reserved, but cares deeply about things. He is usually very silent, and seems quite mysterious, always hiding his feelings. He can almost match Robyn in speed by running at up to 250 mph.

Daniel Dimar Carter is Robyn's fraternal twin. He is 14. He is usually sarcastic, 5'11", has pale skin, jet black hair, very light green eyes, and is blind. Due to a attack when he was younger, Daniel is effectively blind, though he can see if his surroundings are white and can identify people by feeling their fingerprints and he can also feel colors. Despite his blindness, the gang often leave things up to him that require precision or detail, such as cooking and doctoring. His sense of hearing is also the best of the gang because of his blindness, although he always wants "the easy way out" of situations and hates his blindness. He has geokinies.

Kathlyn Kūki Carter is 11 years old, has tan with golden undertone skin, and has wild, long, jet black hair. She likes Robyn over Nick and can't live without her. Her wings are often said to be tawny-brown, almost cream. She likes fashion, especially about hair, clothes, and make-up. Katie can hack into computers with her ability to sense leftover emotions, also called psychometry, and also has aerokinesis.  Katie is described as Robyn's best supporter and the peacemaker.

Max (or Maxims) is 6 years old with blonde hair, blue eyes, light skin. He is Anya's best friend. He has a mischievous nature and makes fun of Robyn sometimes. He is an expert at constructing and setting off bombs and explosives, along with Daniel, his closest friend in the gang.  Max's main ability is to perfectly mimic any voice and to control lightning.

Anya Katya Carter is 6 years old, with red eyes and curly "white" blonde hair. Angel is also the friend of Maxims (Max).  She obtains seemingly random powers at random times. She acquires the ability to hold her breath underwater and swim in deep water at pressures that would crush a normal human, biokinesis:change her appearance into a snow leopard form and change her skin and eye color.. She is usually mistaken to be powerless and innocent, but she is truly extremely intelligent and dangerous. Her ability to control ice and people's minds gives her extreme power. 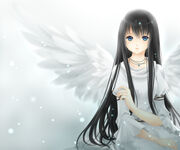