Edit
watch 01:36
We're Getting Mutants in the MCU - The Loop
Do you like this video?
Play Sound

Guard (v.o): Yeah! How was I supposed to know the teenager was a dhampier?

German man (v.o): You could have read the files or used your powers idiot!

British man (v.o): Anyway I have a plan to end the dhampier race once and for all…

When I woke up, i noticed Anya's body leaning against my side. She was still asleep, so I didn't move.

When I tried to stretch, my chest was revealed to be covered with bandages.

Finally Anya woke up and her crimson eyes opened. I had ice-blue eyes, Katie, hazel and Daniel green, with Anya crimson red. I have our mom's copper auburn hair, not the black hair dad passed on to Daniel and Katie.

Anya's crimson red eyes looked at me for a second before she spoke.

Her voice, soft and sad.

I turned my head and muscle protested on my chest.

Katie got up and made some tea.

I was scratching my cat ears.

Anya: That guard shot you.

She was eating a peanut butter sandwich.

Robyn: I know that... But how did we get into a hotel?

Katie looked at her tea, then me.

Katie: Well... Remember when you got shot?

Katie: After we got off the boat...

FLASHBACK-August 16th9:36pm: Katie (v.o): You started coughing up blood, and then you fainted. We had to find a hospital so we called Patrice.

Patrice: WHAT?! Robyn got shot?!

Katie: Hey... We need to know where the nearest hospital is.

Katie: I could get there in 6 minutes, but I can't carry Robyn and Anya.

A teenage boy jumps off a fire escape and lands on his feet. Then he goes behind Katie, startling her.

Nick (whispers): Shh... Do you want to wake up all of Vegas?

Katie: Who are you?

Nick: Nick Walker. At your service.

He sighed and turned to me and put his hand to my chest.

Nick: Why is Robi bleedin'?

Anya (timidly): How do you know onii-chan's name?

Katie: Some guard shot her.

Katie: He had black curly hair and one blue eye and one yellow eye and a pig face.

Nick's eyes turn yellow for a second and he growled and mutters something in Latin.

Nick: How come I can smell silver in Robi?

He started sniffing me.

Katie: The guard had a silver gun. We have to get her to a hospital, now-

Nick lifts me and puts me on his back gently.

Nick (cont.): We just need to remove the bullet.

Nick uses his sweater to cover the wound and me.

Nick scales the wall and jumps onto the roof.

Katie's wings unfold and she starts to fly while carrying Anya.

While we were roof jumping, i purred and started rubbing my head on Nick. Nick held me tighter and grinned at me.

I looked around the room and noticed Nick wasn't there.

Anya: He went to get food. 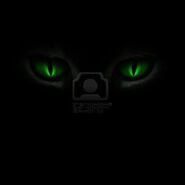